Kirby’s Adventure NES Game Cartridge
Kirby’s Adventure was released for the NES in 1993. It is Kirby’s only game for the NES and second Kirby game after Kirby’s Dream Land. The game also debuts Meta Knight. EGM awarded Kirby’s Adventure the best Game on NES in 1993. GamePro also gave it a great review, giving the game a perfect score and said it was one of the greatest 8 bit games in history. GamesRadar has it ranked 17th best game ever made for the NES.
The story starts with Kirby awaking from a nap after lunch and had no dreams. He then visits the Fountain of Dreams to figure out what is going on. He finds out King Dedede stole precious Star Rod, which is the fountain’s power source, breaking it seven ways. He gave six of the pieces to allies, which included Meta Knight, Heavy Mole, Kracko, Mr. Bright and Mr. Shine, Paint Roller, and Whispy Woods. He kept one piece for himself. With the Star Rod being gone, all of the Dream Land population started to become restless and not able to have any dreams. Kirby then decides to go search for the Star Rod’s seven pieces and return them to the Fountain of Dreams to restore the dreams of the population in Dream Land.
The game has seven worlds with all seven having a level set, a fight with a boss, and a Warp Star that takes Kirby to the next world. Most of the worlds will have a mini game that gives the player a chance to win extra lives. Museums that are located in the worlds will let Kirby gain specific powers. Arenas are also present in some worlds, which has the player battle mini bosses to earn items to restore health and allow Kirby to absorb the special ability from the boss. This was also the first Kirby game to have the save feature. Data is saved automatically when the player completes a level.
The goal of each level is getting to the end of it. Kirby will take damage from touching enemies or dangerous objects. If all of Kirby’s HP is depleted or if he galls down a hole, the player will lose a life. Food items can restore health immediately or give him invulnerability for a short period of time. Kirby can do the basic walking, running, and jumping. He can also dodge and attack enemies with his slide tackle. Flying can be accomplished with Kirby inflating himself, giving him the capability of reaching any part of the level that is not being blocked with an obstacle. Kirby won’t be able to use other abilities while flying, but can exhale any time to release a small cloud that is used for damaging enemies or destroying blocks.
Kirby’s primary ability is inhaling infinitely until he sucks in a nearby enemy or object. When objects are inhaled, he can either swallow them or spit them out which will deal damage to an enemy. When specific enemies are swallowed, Kirby will copy the special ability the enemy was possessing. This will give him a variety of powers to use throughout the game, with some needed for solving puzzles. Kirby usually cannot inhale other objects or enemies while being equipped with special abilities. If the player desires, they can drop abilities any time which will send a bouncing star behind him for a small amount of time. The drop will be automatic if the player ever sustains damage. The ability lost can be regained by inhaling the star before disappearing and then swallowing it.
UPC: 0-45496-63072-0
Platform: NES
Players: 1
Condition: Used
Genre: Platformer
Region: NTSC (North America)
Rating: Everyone 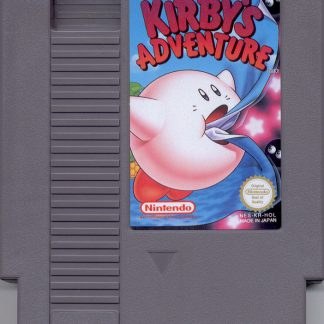