Mig 29 Soviet Fighter NES Game Cartridge
MiG-29: Soviet Fighter was released for the NES in 1992. Codemasters developed the game and Camerica Limited published it. The game closest in comparison would be After Burner. The player will take control of a fighter pilot flying a MiG-29. The goal of is to destroy the Army of World Terrorist. The player’s view will be a little bit behind their plane. The player will need to shoot down enemy fighter planes, installations, and tanks while trying to avoid their fire. The weapons available will include air missiles, bombs that release downward, and nuclear bombs. The player can pick up more ammo for these weapons by collecting parachutes that are dropped within their path. There will be deserts, arctic scenes, and mountain ranges to clear out during the levels. There will also be boss fights.
UPC: 0-69667-07407-6
Platform: NES
Players: 1
Condition: Used
Genre: Shooter
Region: NTSC (North America)
Rating: Everyone 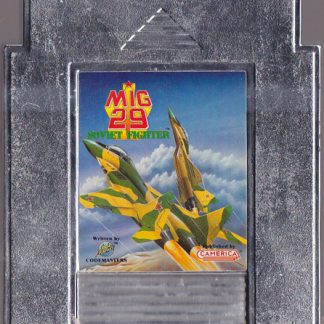