Prince of Persia NES Game Cartridge
Prince of Persia was released for the NES in 1989. The game’s main character needs to venture through dungeons to find Jaffar, the Grand Vizier, and defeat him to rescue the princess. Like Mechner’s first video game Karateka, Prince of Persia uses rotoscoping for the realistic and fluid animation. Mechner used his brother’s videos of him doing acrobatics in white clothing and films like Robin Hood for the games character movements. Though the game was not immediately successful, it got critical acclaim and sold a lot of copies when it was ported to a large amount of platforms. The success lead to two sequels and two reboots, with the first reboot being in 2003, having two sequels to after its release, and the second reboot being in 2008.
The game takes place in Persia during ancient times. The sultan is off in a war in another land and Jaffar, a wizard and his vizier, seizes power. The princess is the only thing in Jaffar’s way of taking the throne, yet the game never mentions how. She is then locked inside a tower by Jaffar and is ordered by him to be his wife. If she did not comply, she was going to die in 60 minutes.The unnamed protagonist, who the Princess is in love with, gets thrown into the dungeons in the palace as a prisoner. For the hero to rescue her, he will need to escape the palace dungeon and get to the tower in the palace to destroy Jaffar before the timer runs out. Not only will traps and guards hinder the player’s progression, but the character’s doppelganger, being out of a magical mirror, will also try stopping him.
The main goal of the game is for the player to lead their character out of the dungeons and get to the tower before the timer is out. There are twelve levels in the game, with the player able to save and resume later after level 3 is completed. The three types of traps in the game that the player will need to avoid. These are guillotines, spike traps, and deep pits that are three levels or more deep. Instant death will happen if any of these traps get a hold of the player. There are also gates that can raise shortly when the player stands on an activation trigger. The player will then need to get through gates while they are opened while avoiding the locking triggers. Every now and then, various traps will be between the gate and the unlock trigger.
The players health is indicated with little red triangles, starting with three. Whenever the player gets damaged, either by a sword, falling two floors or getting hit by a rock, one of the red triangles will be taken away. Small jars with red potion are scattered through the levels that will restore one of the health indicators. Large jars with red potion will increase the max amount of red triangles by one. If the player’s health reaches zero, the player will die. When this happens, the game will restart the level at the beginning where the character died. However, the timer does not reset back to the point when the level was started, thus giving a timer penalty to the player. The player will have no life counters, but if the timer reaches zero, the princess dies and then the game is over.
Another obstacle the player will need to bypass are Jaffar’s swordsmen. A sword can be obtained in stage one, which the player can use to fight the swordsmen. The characters sword moves are back off, advance, parry, slash, or combine a parry and slash attack. The enemies will have health similar to the players character. To kill them, the player will need to slash them to deplete their health until it is gone, or push them into a trap.
A special trap will be encountered in the fourth stage, serving as a plot device. This trap is a magical mirror in which the player’s appearance will be followed. The player will have to jump into the mirror, which will create their character’s doppelganger, emerging from the opposite side. The clone then hinders the player when he steals a potion and then throws him in a dungeon. The player cannot kill his clone since they share the same life, with any damage being done to one also damaging the other. This will force the player to merge with the doppelganger. Once merged, an invisible bridge can be crossed to a newer area. The battle with Jaffar will then start. Since the final checkpoint is reached upon battling Jaffar, a game over will no longer occur if the timer runs out. Once defeated, Jaffar’s spell will be broken, thus saving the Princess. The timer will be stopped when Jaffar dies, and the remaining time will be put on high scores.
UPC: 0-52145-80008-3
Platform: NES
Players: 1
Condition: Used
Genre: Platformer
Region: NTSC (North America)
Rating: Everyone 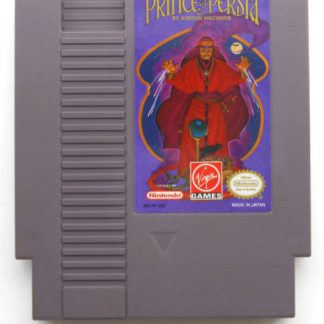