Rampage NES Game Cartridge
Rampage was released for the NES in 1988. It was originally an arcade game released in 1986. It was developed by Bally Midway Manufacturing Company and published by Data East. Unlike the arcade version, the NES will actually have an ending to the game, when the arcade version had infinite levels. The game can be played two players who control enormous monsters who used to be humans. The characters in the game are George, who is a King Kong looking gorilla that was transformed by some experimental vitamin , Lizzie, who is a Godzilla looking lizard/dinosaur that was transformed from being in a radioactive lake, and Ralph, who is a gigantic werewolf transformed by some food additive. They will need to beat down buildings to progress through the game while eating humans and destroying trolleys, boats, police cars, taxis, tanks, and helicopters.
The players can climb buildings and punch them into pieces while going down, eventually turning them into rubble. Random people in the building can be grabbed or punched, along with food being able to be eaten. The player will take damage from falling, getting punched by other monsters, shells, dynamite, and bullets. Health can be restored when eating the food items like roast chicken, fruit, and the soldiers. If too much damage is taken, the monster will transform back into a naked human and start walking off to the side of screen. While as a human again, they become vulnerable to be eaten by another monster. If the player chooses to continue, they will mutate back to a monster. If they already walked off the screen and then decide to continue, they will return in a blimp.
Destroying windows will generally reveal items or a person, being either harmful or helpful. Money or food are helpful items while cigarettes, electrical appliances, and bombs are dangerous items. Some items can be either harmful or helpful, depending on when the player gets them. Examples are a toaster, which is dangerous until it pops with toast and a photographer will need to be eaten quickly before they flash the player’s monster with their camera, dazzling them and causing them to fall. When civilians appear waving their arms from a window trying to signal for help, the player can grab them and increase their points rapidly. Every monster can only hold certain types of people, with George only able to hold women, Lizzy only able to hold a middle aged man, and Ralph only able to hold businessmen.
UPC: 0-13252-00211-1
Platform: NES
Players: 1-2
Condition: Used
Genre: Action and Adventure
Region: NTSC (North America)
Rating: Everyone 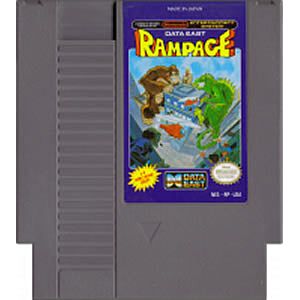