Simpsons Bart vs The World NES

Simpsons Bart vs The World NES Game Cartridge
The Simpson: Bart vs the World was released for the NES in 1991. Bart Simpson goes on Krusty the Clown Show and wins an opportunity of participating in a worldwide scavenger hunt. The contest was actually rigged by Smithers, the assistant of Mr Burns, to try and get rid of the Simpsons for them causing him trouble for many years. Burns then sends family members and agents to kill the Simpsons while they are on the worldwide scavenger hunt. Bart will travel through multiple locations, being Hollywood, Egypt, North Pole, and China, to collect items, with each location having multiple stages. Every stage also has a boss, each one being a Burns family member. The game will have cameos occasionally from other family members of the Simpsons.
In every stage, the player will need to navigate the area and collect items like firecracker balls that are used for self defense and Squishees that will restore health. Bart will have five hit points for every life. When a cap is grabbed, Bart will turn into Bartman, his superhero alter ego. This will only last a limited time. The important items in every stage are souvenirs that are Krusty branded. Every stage will have one, and the player will need to find all of them to get the game’s best ending. This will also unlock the Hollywood bonus level. Other Simpson family members will appear to give the player hints on the location of souvenirs. Every area will also have multiple mini games with puzzles like a matching game with cards and trivia with questions based on episodes of The Simpsons. Due to the year the game was released, the questions will only be from seasons one and two.
UPC: 0-21481-10505-3
Platform: NES
Players: 1
Condition: Used
Genre: Platformer
Region: NTSC (North America)
Rating: Everyone 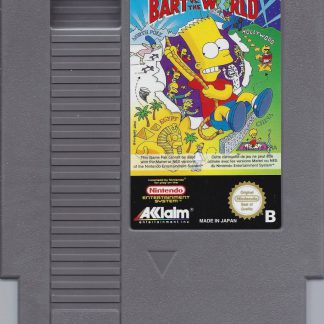 You're viewing: Simpsons Bart vs The World NES $29.99
Add to cart