Solstice NES Game Cartridge
Solstice was released for the NES in 1990. It had one sequel released called Equinox. Software Creations developed the game and CSG Imagesoft produced it in North America. The music loop that was created by Tim Follin on the title screen runs for almost three minutes and then starts over. It is drawn upon Irish and Arabian folk themes, including other themes from rock. It used complex rhythms and various orchestration while shifting timbre and tempo frequently. A website called Flying Omelette said Solstice had one one of the greatest opening songs they have ever heard on an NES video game.
The events take place at Winter Solstice. On the eve of Winter Solstice, Eleanor, the Arcadia Princess, is kidnapped by Morbius the Malevolent to have her sacrificed ritually to become the Darkness’s Evil Baron. The wizard Shadax goes to Kastlerock, the stronghold of Morbius, after he witnessed the kidnapping to save Eleanor. Shadax had learned about a hidden entrance leading into Kastlerock that will also reveal where the Staff of Demnos is, which is a weapon of ancient that has the power of being able to defeat the evil Morbius. The staff weapon was purposely hidden inside of Kastlerock because it would be the last place Morbius would expect it to be. His spies could never find the staff since it was split into six separate pieces and were made invisible. Every 100 years, however, all the pieces will become visible on Winter Solstice. Since Shadax knew a way into Kastlerock, he entered it to put the Staff back together, defeat Morbius and his forces, and save the Princess.
The player will take control of the wizard Shadax and explore a maze that has isometric gardens and rooms inside of Kastlerock in order to find all six of the Staff pieces since no other weapon can defeat the evil Morbius. The game is non linear and there is no fixed play sequence. The player will need to collect multiple keys, have plungers depressed, and set bombs off before entering other areas in the dungeon. Shadax has the ability to pick objects up, jump, and use a variety of potions. The player must try to avoid monsters from touching them to survive. When a puzzle in a room is solved, the player will obtain a vital item or go into the next room. The player will need to avoid spiked floors, pitfalls, and monsters like trolls and slimes. Some of the monsters will be used for solving puzzles. Shadax also can jump off falling blocks and pick them up simultaneously. The player will need to perform this repeatedly in some of the rooms to cross gaps. When the game is finished, the player will receive a score in a percentage. There are 252 rooms that are worth 1 each and 52 items that are worth 5 each. All the rooms and items together are worth 512, which is 100 percent.
UPC: 9-10484-91048-4
Platform: NES
Players: 1
Condition: Used
Genre: Puzzle
Region: NTSC (North America)
Rating: Everyone 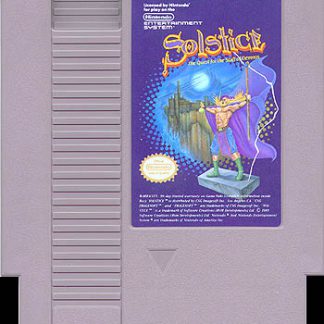