G. I. Joe The Atlantis Faction NES Game Cartridge
G.I. Joe: The Atlantis Factor was released for the NES in 1992 and Kid published the game and Capcom published it. The Cobra commander, who survived the last fight with the Joes, found the ancient Atlantis and started using it as his base. He put together an almost indestructible army with powerful weapons from space and plans to use the Atlantean powers that have been long lost to take over the world.
Gameplay is similar to the Bionic Commando series from Capcom, such as the overhead map available for the stages. To progress through the game, you must search the map and complete all the sub-stages the will lead to one of the many Cobra bases. When you get to a base, you will need to fight the Cobra forces and finish a side mission, like saving a hostage, finding an item, or setting bombs. There is a boss battle at the end of each stage against one of the Cobra leaders.
Roadblock, General Hawk, Snake Eyes, Wet Suit, Duke, and Storm Shadow are all playable characters. Hawk is the only character that can be used when the game starts and the other characters will be unlocked while completing stages. Once unlocking other characters, you can choose which ones to go with you and can alternate them during the game when you access the pause menu. Every character also has their own statistics, all having different stamina, agility, and strength, but they are not shown. Three support characters, Spirit, Gung-Ho, and Big bear, can be called upon to help you by refilling your life or giving you ammo. These support characters must be found first during specific sub-stages. The character Stalker appears but only as the coordinator for the G.I. Joe base during cutscenes.
UPC: 0-13388-11032-2
Platform: NES
Players: 1
Condition: Used
Genre: Action and Adventure
Region: NTSC (North America)
Rating: Everyone 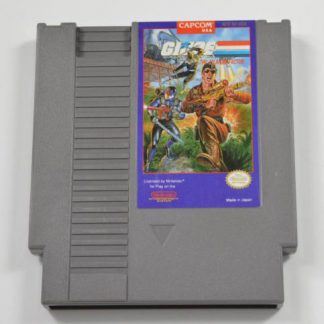