View cart “Cobra Triangle NES” has been added to your cart.

Super Sprint NES Game Cartridge
Super Sprint was released for the NES in 1989. It was developed and published by Atari. The game was originally and arcade game released in 1986. It was also the successor to the Sprint game series and Gran Trak 10, which were games in white and black that had graphics that were very primitive and from the 70’s. Championship Sprint was released in 1986 which is pretty close to being identical but has different tracks, having a regular two player sized cabinet instead of the 3P wide cabinet Super Sprint had. Because of Super Sprint’s simple design, it was relatively very easy to make. This inspired many games that were similar, most of them from hobbyists. There are also some games containing a tribute mini game like Jet Force Gemini.
The player will drive in their Formula One car on circuits with the view being from above. Two players can drive simultaneously against computer opponents. Though the circuits will be viewed in the top view, they will always fit onto the screen, preventing any scrolling. When three laps have been raced, the winner will advance onto the next race. There will be 8 total circuits, but Super Sprint ends only if the player gets to the 85th race where a Super Speedway bonus circuit is played. When the player progresses to the higher levels, there will be more obstacles appearing on the race tracks, like small moving tornadoes and oil puddles. If a car touches one of them, the player will lose control temporarily while the car is spinning and sliding. Driving into the tracks wall at high speeds or falling off a bridge will destroy the player’s car. A helicopter the comes to replace it.
The player’s car is able to be customized by obtaining wrenches scattered around the race tracks. Three wrenches can be exchanged for better acceleration, higher speed, or improved traction.
UPC: 0-31763-05112-1
Platform: NES
Players: 1-2
Condition: Used
Genre: Racing
Region: NTSC (North America)
Rating: Everyone 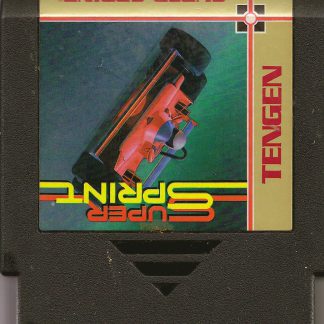