Tom and Jerry NES Game Cartridge
Tom and Jerry was released for the NES in 1991. It was developed by Software Creations and published by hi-Tech Expressions. The game’s two main characters are Tom, the cat, and Jerry, the mouse. The story is about Tom mouse-napping Tuffy, who is Jerry’s nephew, by locking him inside a truck up inside the attic. The player will take control of Jerry and will need to go through a variety of levels inside the house in order to get to Tuffy and free him. The player will be able to run and jump and also be armed with marbles they can throw at the enemies, like toy soldiers or spiders. Other usable weapons are a drill, invisible ink, a hammer, moth balls, water cups, a meat cleaver, and bubble gum. The player can also use mouse holes for teleporting around a level. There are also power ups that give stronger throws, more lives, etc.
UPC: 0-87855-00033-1
Platform: NES
Players: 1
Condition: Used
Genre: Action and Adventure
Region: NTSC (North America)
Rating: Everyone 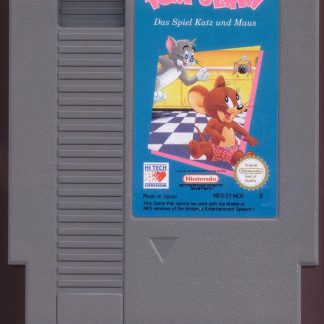