Mario Paint SNES Game Cartridge
Mario Paint was released for the SNES in 1992. It was developed and published by Nintendo. There have been prominent game developers that have cited the game as an inspiration. A designer of the game WarioWare D.I.Y., Masahito Hatakeyama, cites the music and drawing creation tools in Mario Paint as the inspiration for D.I.Y.’s music and drawing creation. Several other of the staff members that were on D.I.Y.’s development team cited the game of teaching them joy of creating video games.
Other than being a utility for basic drawing, Mario Paint will allow the player to create custom pixel by pixel stamps. Many publications, which includes Nintendo Power, had released guides for creating stamps that were Nintendo related and iconic within the game. On top of creating pictures, a player is able to make looping animations that are simple and set music with a music generator. The animations that are painted by a player can be viewed only on the television screen. There were instructions that provided players how they could record them onto VCR’s, but there was no other option to export the work done during Mario Paint. Also, the standard will feature 60 different patterns and textures, 75 different types of stamps, 15 customizable types of stamps, and 9 types of special erasers that will have different effects between the scenes.
There is a mini game for fly swatting within Mario Paint that is called Gnat Attack. This mini game is an action game that is fast paced and will use the mouse peripheral’s full advantage. The player will control a hand wearing a glove that looks similar to the hand that is seen on the game’s title screen. The gloved hand will have a flyswatter that the player will use to swat the flying insects that are on the game screen before they sting the hand the player is controlling. There will be three levels with each containing a 100 insects to swat and an end boss. When the end boss is defeated, the player is taken back to the first level and will add an icon on the screen’s top left. There will not be a reward or a final level since the game loops endlessly.
On the game’s title screen, there is a secret mini game. The player will be able to click every letter in the title and certain actions will happen. Some of the letters will change the game’s music, have Yoshi come across the screen, have Mario grow and shrink, allow the player to paint the title screen’s background temporarily, and some other features.
UPC: 0-45496-82008-4
Platform: SNES
Players: 1
Condition: Used
Genre: Other
Region: NTSC (North America)
Rating: Everyone 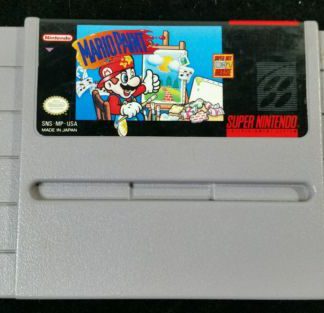