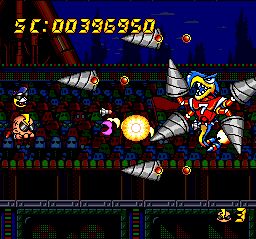 On a console filled with more shooters than you can count you need some kind of “hook” to garner some attention.  That could be anything from insane graphics, unique level design, art direction, etc.  In the case of Air Zonk you need only gaze upon the title character and be intrigued.  It would have been easy for developers Red and Hudson to coast on the slight link to the Bonk series however they instead took the time to imbue the game with its own identity and in the process made one of the top ten best shmups for the console.

In the distant King Drool unleashes an army of robots to take over the world.  A cyborg named Zonk and his numerous companions are the only force that stands between Drool and world conquest.  This is clearly a spinoff of the Bonk series but the ties are tenuous at best.  Despite being a shooter Air Zonk establishes its own world and the character would go on to become extremely popular, replacing Bonk as the system mascot in the US for a time.

Take Bonk, give him pair of lightning bolt sunglasses and add a pinch of Astro Boy and a star is born.  Zonk is practically a living weapon, with an army of powerups at his disposal and the ability to generate some of his own.  Your boot jets can be used to fry any enemy stupid enough to fly in its wake.  By holding down Button I a screen clearing smart bomb is generated and oddly enough can be used an unlimited number of times.  I suppose the charge time is supposed to offset this but you can spam the shit out of it with some skill.

The power-up system is what really stands out.  There are well over a half dozen weapons, that range from homing missiles, playing cards, boomerangs, alligator teeth (don’t laugh, its strong as hell) and even one that shrinks you to midget size but allows four way fire.  The power-up capsules fly in pretty frequently so if you don’t like your current weapon a replacement isn’t too far away.  The levels are long enough that you can experiment with a multitude of weapons and you’ll want to as the weapons system is taken even further.

10 companion helpers are available, with the option to either choose one every level or let the computer select automatically.  The characters aren’t just faceless options like Gradius, they are strange as hell and possess unique powers.  I mean who thought up a cow shaped like a puffer fish?  Or the humanoid drill and a dump truck?  Although their designs will leave you scratching your head the added firepower they provide is welcome and once you collect a second giant smiley face the two merge into an invincible hybrid with massively increased power.  Each stage is long enough that you’ll have the opportunity to experience this at least once.  And it gives some incentive to replay the game just to see what other outlandish creation the other partners will create.

Although the game is short at only five levels Air Zonk is not a cake walk; at times things become chaotic and the partners aren’t invincible. Too many hits and they’ll leave your ass behind.  When the game heats up you’ll definitely miss having a buddy at your side.  While the levels aren’t necessarily split up into segments there are clear breaks when you fight a mini boss.   But in the end its an all too brief ride, which is a shame when the game is this good.

The change in setting has resulted in a much wider variety of set pieces than the staid prehistoric backdrops that permeated the prior Bonk games.  Artistically the game is over the top with an everything but the kitchen sink approach to enemy design.  The bosses are a mish mash of metal and animals and whatever else you can think of slapped together and it works flawlessly.  The levels range from baseball stadiums to oil rigs and deserted cities.  Even if these tropes have been used before you’ve never seen them like this.  And the soundtrack is equally fantastic.

The only thing that would have really driven Air Zonk into the stratosphere would be more levels.  But as it stands this is still one of the best shmups for the Turbo-Grafx 16.  Which is high praise considering just how many there are.