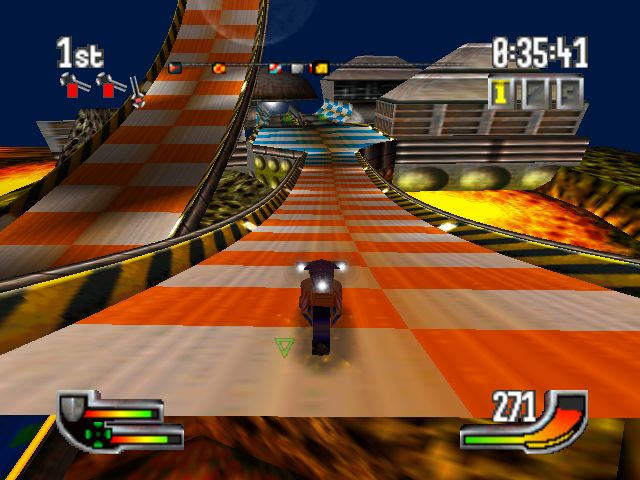 One thing you can say about the N64, it has more than its fair share of racing games.  Of the 290 or so North American releases for the system almost 50 are some form of racing game.  With that many nearly every incarnationof the genre were covered from car combat to the more esoteric like F1 racing.  One subset that was just gaining popularity was the futuristic racing genre, of which Wipeout was the clear title holder.  With F-Zero nowhere in sight Acclaim filled the void with Extreme G.

In the future Earth has become a ravaged wasteland leading humanity to find a new home.  Once settled attention turns to entertainment, and the XG federation is established with races taking place across numerous worlds.  With its techno soundtrack featuring many of Europe’s biggest underground electronic acts and its sleek Designer’s Republic front end Wipeout left an indelible mark on the genre that all future racing games would have to live up to.  Although Extreme G does not reach the same heights it still possesses thrills of its own and has enough features and modes to occupy a decent amount of your time.

The game does a pretty good job of mimicking the features of the game’s that inspired its creation.  There are over 8 plasma bikes to choose from, each graded in handling, speed, acceleration, shields and weapons.  These distinctions have to be considered because of the track layouts.  The Extreme Contest mode is broken down into 3 championships, with each increasing the number of tracks by 4.  Once unlocked the tracks can be explored in the game’s variety of single and multiplayer modes and in addition, completing each championship doles out “cheat” codes that unlock more cars, tracks, etc.  It’s a nice feature Acclaim started with Turok and provides incentive to actually play the game.

The two biggest stand outs of Extreme G are its track design and speed.  The track designs redefine the term rollercoaster ride as they feature an insane amount of sudden turns, corkscrews, loops and sudden drops that keep every track fresh.  With over 12 tracks taking place a number of worlds and environments the game does an admirable job of putting on a visual spectacle.  Some of the track elements would show up later in F-Zero X, such as driving on the walls and ceiling, and while it’s much more pronounced in that game Extreme G did it first.

Extreme G is fast.  Really fast.  You can reach some insane speeds as you rocket around each track and the competition is never too far behind.  But not because of rubber band AI.  The numerous weapons all play their part in making sure that you can never rest on your laurels, but when you hit nitro on a straightaway the sense of speed really kicks in.  As great as the sensation of speed is however it is to the game’s detriment.

Because you’re able to move so fast in most cases you won’t have enough time to react to a change in track layout or if a weapon hits you from behind.   The controls themselves are not as tight as they should be and when combined with the overbearing speed means you’ll fly into walls a few more times than you would like.  It also doesn’t help that a portion of the track layouts are not conducive to the velocities you can reach.  The qualifiers for each circuit become pretty steep quickly, meaning you’ll either spend a sizable amount of time practicing each unlocked track or simply giving up.

Extreme G was a relatively pretty game in 1997 but the years make its flaws more pronounced.  The trademark N64 fog rears its ugly head, masking the limited draw distance and causing massive amounts of trackside geometry to pop in suddenly.  The art direction holds up but is let down somewhat by blurry textures.  But despite all of this when the tracks split into double loops or manage to avoid the technical limitations of the system you’ll forget all of this.  There are some cool lighting effects from the weapons and another cool touch are the weapons attaching themselves to each car.  The music unfortunately wasn’t good then and isn’t now.  The generic techno sounds even worse when run through the N64 speaker; the sound effects really prop up the audio end of the game.

So there you have it.  There’s a wealth of game modes and content to sift through but the game’s controls bring it down a notch.  Extreme G isn’t the game it could have been but it laid down the foundation for its much improved sequels.