Written by
Sayewonn
Posted in
Playstation
Tagged
action, Contra, One 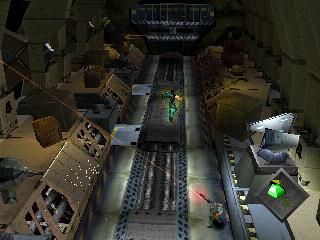 Many genres in the 32-bit era went through a terrible birthing process, for lack of a better term.  While the gameplay of platformers, shooters, and action games had been more or less perfected in 2d translating that into 3d was a different beast altogether.  There were some truly awful action games released early on for the Playstation and Saturn but one such game that still holds up today is One, a little known gem from Visual Concepts before Sega snapped them up.

You wake up on the floor of an apartment building with no clue as to your identity except a bar code on your neck.  Worse, your arm has been replaced with a high tech prosthetic and the police are after you with helicopters and guns blazing.  It’s in this action soaked environment that One begins.  It hits the ground running and only lets up for brief periods and uses its premise as a suitable excuse to tear shit up.

Many action games were released in that 5 year period but for the most part the majority suffered from crippling flaws that ruined the action.  Although One does have its share of problems it is one of the few that were able to overcome them and remains enjoyable today provided you can stomach a some frustration.

The main focus of the gameplay is built around rage.  Your “life bar” is refilled and expanded as it builds and your attack power increases accordingly.  Rage is built up by destroying enemies in rapid succession, destroying objects in the environment and collecting the occasional power-up.  It’s a simple that is implemented beautifully; while you may become a veritable superman in short order all it takes is a few too many hits to bring you back down to earth.  A better analogy, it’s like going from He-Man to Adam in a few seconds.

While your arm cannon is enough to take out most foes melee attacks are just as effective for the many that will sneak up on you.  There are a few secondary weapons such as homing missiles and bombs but they are so rare it’s not worth mentioning.  Rage is handled pretty well as there are always barrels, crates and other destructible objects lying around should you take a few too many hits.  It doesn’t slow the action down too much and serves as a welcome breather when needed.  What does however is the presence of platforming, which has its own issues that I’ll get to in a bit.

If Contra III was an action movie in game form One is the equivalent of a summer blockbuster for 3d games.  Once the game starts it doesn’t let up as you are driven from one set piece to the next.  Seeing a helicopter pepper the hallway as you make a mad dash to escape is simply awesome and ends in a battle against said vehicle.  The rooftop chase sequence is heightened by the radio chatter from enemies as you show them exactly why you are so pissed off.   The monorails and train of later levels evoke many a cinema classic.  When it works and is firing on all cylinders One is exceptional.

But that is the problem; when it all works.  The main problems stem from the camera.  For the most part the camera is static and offers the best view available and works.  But for that 20% of the time where you want or need to manipulate it, no dice.   This is problematic for the abundance of platforming segments in most levels and is where most of the cheap deaths occur.  One can be a challenging game at times and does not benefit from the artificial challenge that stems from the camera.

Toward the second half of the game the platforming is ratcheted up heavily and is positively nightmarish in conjunction with the camera problems.  The fifth level especially is near unplayable due to the camera problems illustrated and the strict time limit needed to destroy the cores that dot the level.  I seriously doubt many will have the fortitude to see it through to the end.  Which is god damn shame because when One is firing on all cylinders it is fantastic.

From the over the top lighting effects to the massive bosses One was a technical marvel in 1997.  I distinctly remember games such as Colony Wars and Crash Bandicoot 2 that pushed the envelope with the light source shading that year and One crushes those two games.  The frame rate stays high for the most part with little slowdown but most importantly the screen tearing that plagued many Playstation games is absent.  The asynchronous loading does its job as advertised and masks load times; you have to remember, in the early years of CD gaming load times were a bitch and considering everything else the game has going for it is a miracle that it works.

If the camera and control issues had been worked out One could definitely have stood as one of the best action games of all time for the PS One.  As it is it has to settle for being above average.