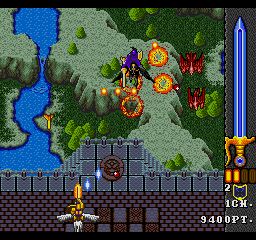 As an adult I look back on my childhood and remember the times when I had near infinite free time to get my game on as I saw fit.  Any tasks such as homework or chores were merely distractions in my quest to become the biggest game junkie the world had seen (not really).  The one that I endured the most was Church; the 2 or so hours of worshiping Jesus were grueling but tempered knowing I would get to go to my brother’s house and play his Sega Genesis.  One of his games was Phelios, an arcade port that while adequate is strictly average.

You control the Greek God Apollo as he saddles up Pegasus in pursuit of Typhon, who has kidnapped Artemis, goddess of the moon.   It’s heavily implied in the between level cut scenes that the two gods are getting it on, which is just plain creepy.  Civil liberties with mythology aside what follows is a 7 level descent into the underworld in pursuit of your foe.  I remember liking Phelios somewhat but even back then I merely tolerated it so that I could get back to Sonic the Hedgehog.  On a platform with many now legendary shmups being average doesn’t cut it, not when you are sharing shelf space with the likes of the Thunderforce series or Gaiares.

Apollo is equipped with a sword that fires multiple smaller shots and can be charged up for a bigger blast.  I’ll tell you right now that the standard shots are utterly worthless.  Everything takes multiple hits to kill and when the action heats up you don’t have time to waste with a pea shooter.  Although the game will start to speed up the over reliance on charged shots actually makes everything feel slower paced.

I hesitate to use the word generic but in this case it applies perfectly.  The power-ups are of the standard variety that you’ve seen many times before; options, homing missiles, wave beams, and reflecting shots make up your arsenal.  The majority are only temporary and have a habit of cutting out right at the boss battles, further forcing you to rely on your charged beams.  While Phelios isn’t really hard it does have its moments, most prominently in the boss battles.  Despite a 3-hit life bar you’ll blow through it pretty quickly while weathering the boss’ relentless assault.

It isn’t common in the game industry but Phelios holds the distinction of one of the few games that gets uglier the deeper you progress.  Overhead shooters were not visual powerhouses back in the late 80s but even taking that into consideration the graphics are poor.  The first level starts off nice enough with some parallax scrolling in the clouds over a serene field but as you descend into dungeons and caves it isn’t too far off to say that presentation would fit in an NES game.  Granted the original arcade release was 2 years prior but there were far prettier games even back then.  This is pretty sad considering they could have used the Greek mythology theme to come up with more inspired battlegrounds.  The lone highlight would be the Artemis fan service between levels but that isn’t something to look forward to.  I would comment on the music but honestly I don’t remember any of it.

This could have been a much better game but instead falls flat on its face.  Most of its features are found in better games that you should be playing instead of this mediocre shmup.  Its not as if you have to really search high and high low for quality shooters on the Genesis, that’s for sure.