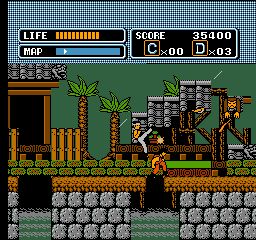 Ugh what an awful fucking game.  This happened to be released pretty early on in the NES life, before kids around the world knew that movie licensed games sucked.  It also happened to be based on a pretty popular movie, so of course we thought the game would be awesome.  We couldn’t have been more wrong.

The Karate Kid was released by LJN (a name we would all dread soon enough) and strangely developed by Atlus; yes that Atlus of Persona and Shin Megami Tensei fame.  I suppose everyone has skeletons in  their closet but Jesus Christ.  Following the events of both the first and second movie you control Daniel in very loose reenactments of the film’s events.  That wouldn’t be so bad in and of itself but clearly no one play tested this POS because it is broken to hell and back.

The first level is a tournament mirroring the end of the first movie.  If the entire game were like this at least it would have been decent since there are no problems here.  It’s a bit simple but mechanically it works.  The following 3 levels are platforming stages and that’s where the problems begin.  Once the platforming starts the game goes to shit immediately.

Your basic punches and kicks are enough to kill most enemies in one hit.  For every few enemies killed you earn 1 drum punch or crane kick but these will activate randomly so there’s no point trying to stock up.  They can also be earned by completing the mini-games scattered in the levels: Ice block breaking, Catching Flies with Chop Sticks, and punching the swinging hammer.  That’s about where the fun ends.

Do you like being flung around uncontrollably until you die?  Do you like being thrown into bottomless pits by the slightest hit?  If any of that sounds remotely fun to you then the Karate Kid is right up your alley.  Touching an enemy will cause you to fall back with no momentary invincibility, so if there is someone behind you, and 90% of the time there is, you’ll bounce back and forth until you die.  Pray to god there are no holes or pits around, chances are you’re going in.  The knock back is really exaggerated; I’d almost swear the game intentionally throws you into the pits no matter how far away you are.

Now take all of these elements and add changing wind in the third level.  It’s making me mad just thinking about it.  And the last level?  Add up all of these issues and magnify them by 10.  The enemies in the final level wield the same techniques as you and some carry weapons.  The spear men are completely broken in terms of reach; you’ll lose plenty of lives or health whenever they spawn.  But somehow the game is still easy despite everything I just mentioned.  At best they will piss you off (I cannot stress that enough) as you cruise through the game for the most part.

Then again there’s no reason to bother playing this.  I remember when a buddy of mine received this, we finished it in one hour, and his mom was not pleased.  The only reason I even bothered playing through it again is to warn future generations of its crappiness.  Don’t say I never did anything for you.