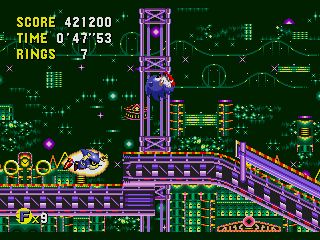 For all of its successes there was still a vocal contingent who felt Sonic the Hedgehog 2 somehow strayed from its roots.  Honestly I don’t see it but there are nutty people in all walks of life.  Some attribute this to its development in America but regardless something was off.  The remaining members of Sonic Team in Japan after Yuji Naka’s departure for the US started work on their own Sonic game which would become Sonic CD.

Sonic CD was released in Japan and Europe first with North America to follow months later.  The little planet that appears in orbit near Mobius once a year has appeared and Sonic, with Amy in tow journeys to see it.  It isn’t long before Amy is captured by Robotnik’s newest henchman, Metal Sonic.  The race is on to save Amy and stop Robotnik from collecting the 7 Time Stones.  Sonic CD from its graphics to its gameplay is very much in the style of the original while offering its own innovations and twists to the series.  As such it is one of the best Sonic games as well as probably the best overall Sega CD game.

Comprised of seven acts with 3 levels each Sonic CD is a very deceptive game.  The spin dash from Sonic 2 has been added and is joined by the Super Peel Out, which allows you to dash from a standing position.  All of the familiar power-ups make an appearance but the newest additions that you’ll come across are the Time Posts.  And it is here where the added depth and the use of the CD’s added space come in.

Signs labeled Past and Future are in abundance and by tagging one and building enough speed you can travel to, surprise, past or future versions of each level with the exception of the boss stages.  The Future levels are dark and decrepit versions of the present, full of enemies at every turn and fewer rings to collect.  The Past is where the fun lies.  By destroying the robot generator in the past you create a good future where robots no longer exist and you are free to explore (within the time limit) with no interruptions.  The objective then becomes to travel to the past and create a good future in both Acts to ensure the Zone has a good future overall.

Effectively there are over 70 levels total but all of this is completely optional.  If you don’t care at all about time travel you can simply play the game as normal.  Time travel isn’t the only way to a good future; the all new bonus rounds can save you a lot of the trouble if you’re good enough to complete them.

The bonus rounds make use of the Sega CD’s scaling capabilities to mimic the Mode 7 effect.  Here you destroy UFO’s in small arenas designed to keep you on your toes.  The main hazards are traps that trip you up and waste time and water which lops time off the clock.  The pace is frantic as the game speeds up, with water becoming harder to avoid as time goes on.  These stages become progressively harder as you go along but never to the point of obnoxiousness like Sonic 2.  By collecting all 7 Time Stones you assure a good future for all levels, negating manipulation of time.

The level design is where Sonic CD destroys many games in the Sonic franchise.  Although not as large as the stages in 3 Sonic CD has massive playing fields that present ample opportunities to build speed.  In some ways they come across as slap dash since you’ll see many instances of rings within walls you can’t reach and other anomalies but traveling in the past will eliminate those obstacles.

Creating essentially 3 versions of every level is no small feat so it’s a wonder that Sonic Team were able to make them distinct while still feeling familiar.  The challenge is progressive; as you progress it becomes harder and harder to build up enough speed to time travel since Sonic isn’t fast enough on his own.  Too bad the same can’t be said for the boss battles.  Robotnik is a pushover; it’s almost as if Sega simply gave up despite some of the creative mechanics involved in some of the fights.  But that’s only a small blemish on an otherwise fantastic package.

What does hurt the game however is its most controversial aspect: the soundtrack.  The US version was delayed to create new music for whatever god damn reason and the results are mixed.  On the whole the original soundtrack is superior but when one version is better it’s by a significant margin.  The Japanese/European edition feature many vocal themes and even some sampling of American music.  The past versions of the music are the same in all versions but still, there was nothing wrong with the original soundtrack aside from some fruity tracks so why Sega of America decided to tamper with it is anyone’s guess.

If the Sega CD had launched with Sonic CD maybe its fortunes would have been slightly different.  It certainly needed more games of this caliber instead of the FMV junk Sega of America were fond of.  This remains a retro gaming classic and thanks to its upcoming release on Xbox Live Arcade, PSN and a new PC port finally more gamers will get to sample its awesomeness.  This is not one to be missed.