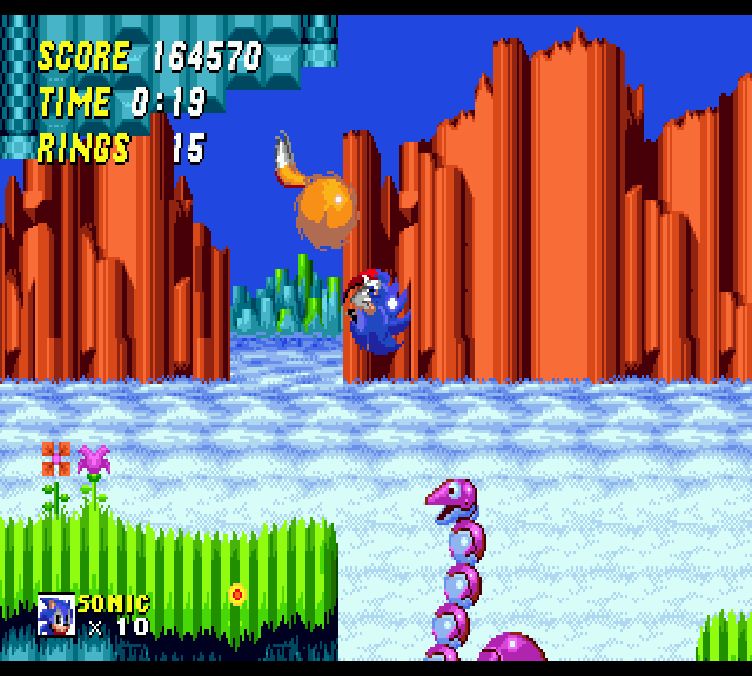 Sonic the Hedgehog did the impossible: give Sega its own mascot and to also showcase just how different they were from Nintendo, in the process achieving god tier status.  Everyone knew it was just a matter of time until a sequel would come and it sure did.  Its release would become an event around the world as everyone was anxious to see how Sega would follow up such a brilliant game.

Sonic the Hedgehog 2 was released on Sonic 2sday, November 24, 1992 worldwide.  Its release became an event.  The story follows Sonic on his mission to stop Dr. Robotnik from collecting all of the Chaos Emeralds to power his Death Egg.  Following on the heels of the revolutionary original expectations were high and amazingly enough Sonic 2 met and exceeded all of them.

Right from the title screen the changes and additions are obvious.  You have a sidekick in the form of Tails who follows you throughout every level.  Tails is invincible and generally only serves to pick up loose rings you might miss, take enemy bullets for you (heh) and occasionally free you if you are stuck in a trap.  A second player can control him but honestly it’s pointless; as soon as Sonic leaves the screen they’ll lose control of him.  A 2-player competitive mode is available in which you race to the finish line in shortened versions of some of the regular zones.

The bonus stages from the original have been scrapped in favor of a 3d tunnel that has you collecting a set amount of rings in 3 parts.  Rather than having to wait until the end of the level anytime you touch a checkpoint with 50 rings or more you can access them, however you lose all of your rings as a result.  The biggest addition by far is the spin dash.  By ducking and pressing any button, you “rev” up and charge straight forward in a burst of speed.  This fixes a lot of the instances in the first game where you would come to a dead halt and have to venture backwards to build momentum.  It’s funny that if you keep pressing jump you’ll increase the velocity of the dash to a degree but it doesn’t make a whole lot of difference.  Nice touch though.

Rather than a small amount of zones with 3 acts each this time each only has 2 with a few exceptions.   The upside is that there are far more of them, each with its own distinct look.  The levels are absolutely massive and the degree of exploration is insane.  Every level has more than 1 path to the exit and a multitude of hidden items to discover ensuring no 2 runs through the game will be exactly the same.  The visual variety in the game is remarkable and since there are only 2 acts per zone you’ll never tire of them.

The pacing of the game is also well done.  For the most part it seems to fluctuate zone to zone between fast moving levels that allow you to build up a continuous streak through a level at ridiculous speeds if you’re good enough and slower paced stages with more contraptions to block progress and switches to press to move on.  I feel this was deliberate so the game wouldn’t feel one note and spice things up.  The Sonic games have a reputation, justified or not, of being completable by just holding right and jumping occasionally.   This game proves that wrong.

The challenge in the game has been stepped up mildly.  You’re invincible so long as you have 1 ring but there are more obstacles such as spikes or enemies that spring up abruptly to cause you to lose your rings.  The boss battles are still an afterthought with very easy to cipher patterns.  Collecting all 7 chaos emeralds this time around is much tougher as you have to put up with Tails in the special stages.  Although he mimics all of your movements, there’s a delay in his actions that will have you pulling your hair out.  The later ones have zero margin of error and honestly it’s better to play through the game as just Sonic if this is your goal.  I can’t count how many times dumb ass Tails ruined what should have been a perfect run.  It’s impossible to keep him from collecting some rings so that danger of fucking up is always present.

The bigger, better, badder axiom applies to Sonic the Hedgehog 2 in every way.  It’s natural to expect a sequel to outdo its predecessor in every category but sometimes that isn’t the case.  Here though Sonic 2 trounces the original.  The graphics are absolutely amazing in terms of their diversity and color palette and once again Sega has blessed a Sonic game with a superb soundtrack.  I’ve played through the game many times and still enjoy it to this day.  Many times developers lose sight of what made the original game in a series a hit but Sonic Team wisely stuck to the blueprint they created and made a game that undoubtedly carries on the legacy of its progenitor.