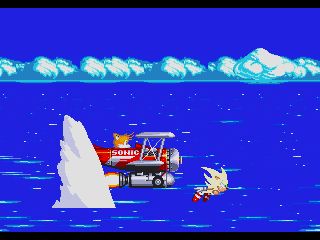 After missing the crucial 1993 holiday season and leaving us with the subpar Sonic Spinball, Sonic the Hedgehog 3 had a lot to live up to.  Sonic 2’s release was a worldwide event with its simultaneous launch around the world so the expectations were high to live up to or surpass that standard.  The question on everyone’s mind became whether or not Sega had the creative juice to continue the series winning streak.  So did Sonic 3 live up to the hype?

Sonic the Hedgehog 3 was released in the first half of 1994 worldwide.  The Death Egg has been knocked out of orbit but not destroyed and instead lands on Angel Island.  There Dr. Robotnik encounters Knuckles the Echidna and the Master Emerald.  Hatching a plan to harness the Master Emerald for his own uses he tricks Knuckles into attacking Sonic and stealing his chaos emeralds with the 2 in pursuit.  Originally planned as one monster platformer Sonic 3 was instead split in two with its other half releasing later in the year.  The game does not suffer in the slightest however as it introduces many new innovations to the series and continuing the winning streak the series had become known for.

As either Sonic or Tails, or alone or together you’ll travel through six levels with 2 sub stages each.  Both are armed with new moves making traversing the levels easier.  Tails has the ability to fly or swim for short periods and Sonic can generate an Insta Shield for a split second.  The shield motif is taken even further with the addition of 3 new shields: lightning, fire, and water.  Each of these provides an additional benefit, such as breathing underwater or attracting any nearby rings.  Battery Backup has been added, correcting one of the biggest flaws part 2 had.  Despite featuring fewer zones Sonic 3 dwarfs both prior installments in terms of length and content.

Far more story driven than before Sonic 3 makes use of cut scenes to further the story.  I use the term “cut scene” literally.  Your encounters with Knuckles are frequent and you get to see just how much of a bastard he is.  There are many scenes that wreak havoc on a level and cause active changes.  The transitions between acts are smoother as well; rather than a fade to black they continue directly from the end level goal post.  It helps to give the game a sense of continuity rather than a disjointed series of stages.

Each level is gargantuan; I would even go as far as estimating 2-3 times larger than the largest in Sonic 2.  All of that space is crammed with content, from rings, shields, and access to the revamped bonus rounds.  The 3 new shields definitely receive a workout, with many of the multiple paths designed with specific shields in mind.  The speed has been increased and there are wide assortments of new contraptions to marvel at as they fling you at breakneck speeds.

The new bonus stage features a three dimensional globe filled with spheres that need to be collected, increasing the pace as time goes on.  This was a welcome change from the terrible half pipe of Sonic 2 that required new perfection to complete because of stupid ass Tails.  While it added many new elements Sonic 3 is a sequel of refinement, taking the elements that worked and making them better while excising the bad.

That sentiment carries over into the game’s graphics.  Sonic’s sprite has been rendered this time, a change that is divisive among the fan base.  The backgrounds exhibit an insane degree of lavish detail; it’s incredible to see Sega beat the standard they set with Sonic the Hedgehog 2.  The soundtrack is phenomenal with a wide range of themes that perfectly match each zone.  Even coming on the heels of Sonic CD the soundtrack fares admirably to that classic.

So there you have it.  Probably the best pure Sonic game released on the Genesis and one of the finest games for the platform.  Crammed full of secrets and options Sonic 3 delivers in a way few sequels ever match.  And even better, combining the game with Sonic & Knuckles makes an already fantastic game even better, but that’s a story for another time………………..