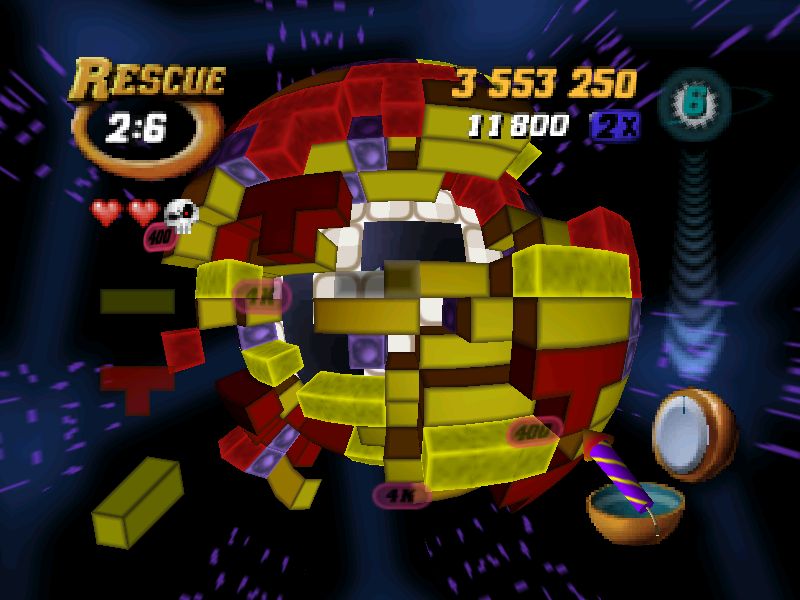 As innovative and addicting as Tetris is for years every developer who touched the license was content to simply put out their own version of the same game over and over again.  Whether  it was due to restrictions placed on them or fear of screwing up a sure thing, the most popular puzzle game in the world was facing stagnation.  A truly new variant on the familiar would not come until creators H2O created Tetrisphere, at first due for the Jaguar but rescued from obscurity by Nintendo.

Calling Tetrisphere a variation on the traditional formula is selling it short; it completely alters your perception of what Tetris is supposed to be.  Rather than completing lines as pieces fall in a vacuum now you are tasked with removing pieces from a sphere to expose its core.  Since the game takes place on a 3d sphere you can rotate it to look for the best possible spot to use the famous Tetris pieces to chip away at the blocks surrounding the core.  That’s the gist of it but it gets more complicated from there.  The game’s tutorial does a good job explaining the basic techniques you’ll be using and the practice mode allows you the freedom to putz around without fear of failure but it isn’t until you actually jump in and face the consequences of your actions that it will click (that sounded way more philosophical than it should have).

To begin removing pieces you must force three of the same type of piece to touch by “dropping” a brick on top of it.  Once a drop has been made a reaction occurs in which the pieces connected will implode and disappear and can even set off further chain reactions if more of the same pieces are connected.  There are strict rules regarding this behavior of course; an “I” shaped piece must have full contact with another I in the initial reaction to at least start a chain.

There is a certain amount of technique needed to maximize how fast you dig through the sphere along with advanced techniques to do so.  Once you’ve cleared some space pieces can be slid around to form combos which not only increase your score multiplier but can cascade and eliminate pieces connected adjacently and even below.  Gravity is also your friend in clearing chunks of space as any pieces left suspended in thin air will fall and potentially set off another chain as well.

It’s in your best interest to keep the combo chains flowing as are important not just for scoring purposes but in gaining magic.  Once you’ve removed 20 pieces from the field you’ll gain a spell such as a rocket, dynamite, lasers, etc. that each have a pattern of removal and area of effect.  The bottom line is these spells are absolute life savers when employed in the most dire situations.

This is not a good position to be in……

Just like the original Tetris you can fail and Tetrisphere skews closer to more traditional games in this regard.  You only have three lives and once they’re gone its game over.  Dropping a brick that doesn’t cause a reaction will take one away; this is easily avoided as the color of the bricks will change if a reaction will occur.  At least it is under normal circumstances.  There’s a timer that constantly ticks down; once it hits zero the sphere will begin to slowly zoom in and a red timer starts. As this clock ticks the sphere will ultimately hit the screen and force whatever piece you have to drop, costing a life if a reaction doesn’t occur.  It’s harrowing to try and concentrate once this process begins, causing sloppy drops in the process to try and reset is position.

Tetrisphere has a full complement of alternate modes for those that don’t find the near 300 levels of the normal Rescue mode fun.  My personal favorite is puzzle mode, which challenges you to clear a given set of blocks using a limited number of pieces and slide moves.  I freely admit that I’ve never been good at these types of challenges but I’ve always loved the lateral thinking it fosters.  Hide & Seek is a slight variation of Rescue that gives specific goals such as finding pictures hidden within the core, shattering a tower by unseating the blocks beneath it, and protecting another tower from damage while shifitng blocks around it.  Multiplayer is truly addicting but anyone who has been lucky enough to link two Gameboys together should already know that.

The presentation is simple and to the point with very few special effects used outside of transparency and minor lighting effects.  The N64’s anti-aliasing allows the sphere to be perfectly rounded; trust me the game would have looked like shit on the PlayStation and Saturn.  The true star of the game is the music, a solid selection of techno beats that made the hardware sing.  The quality of the game’s soundtrack came at a perfect time when the system was being criticized for the lackluster soundtracks that plagued its games due to limited cartridge space.

Tetrisphere is a complex but ultimately satisfying variant of Tetris that offers up a unique set of play mechanics that hasn’t been duplicated since.  Unfortunately it hasn’t seen a rerelease on any platform so your only course is to track down the cartridge itself.  If you love puzzle games then this is a no brainer.