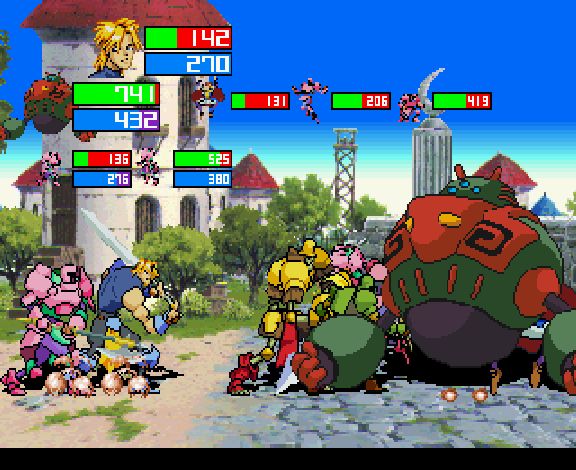 By the mid-90s beat ‘em ups had run their course in terms of popularity.  The once popular side scrolling brawler could not bear the burden of mediocrity that had infected the genre on the 16-bit platforms.  Most of these games were content to implement the bare minimum in terms of play mechanics with no innovation and even the standard bearer at the time, Final Fight, suffered in the process.  Ironically Capcom’s own Dungeon & Dragons series was exactly what the genre needed.

Along came Treasure who in one fell swoop created one of the best brawlers of all time, Guardian Heroes.  And it was their first Saturn game!  Guardian Heroes took the best of every game that came before it, the RPG mechanics of River City Ransom, the branching paths in Final Fight 3, and combined it with a battle system with more depth than most fighting games to create a game that is more fun every time you play it.  It didn’t receive the popularity and sales it deserved due to the Saturn’s fortunes in the US but thanks to its recent rerelease on XBLA a new generation of gamers can experience greatness at its finest.

The spirits of Earth and Sky waged war long ago and in an effort to win the war the Sky spirits granted humans the use of magic.  The Earth spirits were defeated however in fear the Sky spirits imprisoned the new wizards along with them.  One of these wizards, Kanon manages to escape and take over the kingdom in secret to search for the legendary sword said to be able to end his reign.  Four warriors (Han, Ginjirou, Randy and Nicole) have found the legendary sword but before they can celebrate their success Serena, a former knight informs them that the knights of the kingdom are coming for it in force, enveloping them in the struggle between the Wizard kingdom and the true royal family.

Every character has their strengths and weaknesses but you have the opportunity to fix their flaws or enhance their strengths through leveling up.  You gain one point per level gained and at the end of each stage can assign points to strength, defense, agility, vitality, magic and luck.   The maximum level you can reach is 200 but that won’t happen in one session.  Technically you can completely ignore a character’s given niche, such as building up Randy’s strength rather than spell power but honestly that would be dumb.  Don’t put so much stock in my words however, the system is there for you to explore!

At first the sheer chaotic nature of the game’s combat will seem overwhelming.  In the opening moments of the game as many as 6-8 enemies will attack at once, a far cry from the days of two antagonists assailing you with one waiting their turn for an ass whipping.  Guardian Heroes uses a three plane system similar to some of the Fatal Fury 3 to help manage the ensuing chaos.  It takes a few minutes to adjust especially as the enemies will use it to their advantage and flank you.  It quickly becomes second nature to switch lanes and wait for them to follow or to take a breather.  Some of the most devastating spells in the game can only be avoided this way; if you’re unfortunate enough to face the likes of Kanon G. Grey you won’t survive unless you use this tactic.

Every character has an array of special moves with different priorities depending on whether you’ve used a weak or strong attack.  Special moves are executed using Street Fighter style commands and in fact the controls are near identical to a fighting game.  Han is powerful but slow with most of his attacks knocking back enemies and inflicting large slices of damage.  His overwhelming strength covers up his near lack of magic.  Ginjirou has average strength but excellent speed making him a combo powerhouse in concert with his selection of spells.  Randy is fun to use since you’ll focus almost exclusively on his spells which is in contrast to Nicole, whose magic is purely defensive.  It sounds lopsided in favor the melee combatants but using your Undead companion to shore up your weaknesses is key.  The only issue is finding a moment to bring up his command menu in the heat of battle.

The single most important skill you’ll learn when playing Guardian Heroes is crowd control.  Most stages are only a few minutes long but in that time you’ll face upwards of 20-30 enemies total, sometimes as many as 10 at once.  Prioritizing the largest threat will go a long way towards staying alive and it doesn’t always pay to be a hero.  The undead hero is invincible so there’s no shame in hanging back and letting him do some of the work for you.  Just as you can string together a long series of combos and clear the screen in moments it’s possible to be the victim of a chain of juggling attacks that can wipe you out with no chance to retaliate which is unfair.  That’s perhaps the game’s only major flaw; it shows little restraint in regards to its insanity and can be hard to keep up with.  It sucks to waste your limited continues due to random string of cheap attacks; the large mechs and trolls will be the bane of your existence.

Those that master the battle system will be rewarded with a long quest by genre standards that takes close to two or three hours to complete the first time through.  The game has insane replay value through its multiple paths and endings.  There are thirty stages total but you’ll only see nine or ten each run.  After certain levels you are presented with three to five choices as to how to proceed with each one affecting the eventual outcome.  Depending on your choice of hero and the paths you take you’ll face one of five final bosses and receive one of seven endings.  To see everything will take at least 10 hours which is more than you can say about most brawlers in general.

Once you’ve exhausted all of the single player content the multiplayer mode offers a ton of variety as nearly every enemy you’ve come across in the Story mode becomes playable for up to six people.  Having said that it doesn’t resemble anything you would call balanced but for the number of options available it’s fun in a Super Smash Brothers manner.

Guardian Heroes’ graphics have a unique look that no other game can match.  The graphics are heavily pixelated since all of the sprites need to scale from the distant background to the foreground.  It’s off putting at first but the level of detail poured into the animation and special attacks makes up for it. The spell effects become a problem when magic is used by more than two or three characters, engulfing the screen in pyrotechnics and making you lose sight of your character.  The character designs were done by the same artist as Gunstar Heroes with a few villains making a cameo.  The huge limbs/small joints combo is certainly weird but unique and gives the game its own visual identity.  The music uses a wider range of instruments than what was possible on the Genesis and is generally excellent.

What more is there to say about Guardian Heroes?  It takes the beat ‘em up genre and gives it a swift kick in the ass, showcasing more inventive play mechanics and ideas than the majority of these games combined.  Not only is it one of the best Saturn games of all time but one of the brightest stars in the genre next to Streets of Rage 2 and Double Dragon.