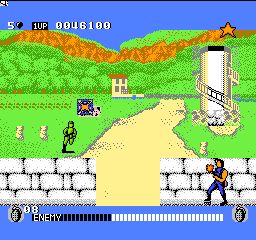 Nowadays I have little interest in military shooters but growing up I couldn’t get enough of it. Commando, Contra, GI Joe, I loved that shit. Cabal was fairly innocuous release back in the day but looking back it was pretty ground breaking. It’s actually kind of funny to think about it but Cabal was a pretty innovative take on the action genre popular in the 80s. Honestly I’m surprised this version of the third person shooter wasn’t more popular; outside of the unintentionally funny Nam-1975, Dynamite Duke, and the awesome Wild Guns it gained little traction. Damn shame too as despite their simplicity these games are intense in a way that most action titles can’t manage. The NES port is very well done and aside from a weird control setup (which is perfectly workable I just don’t like it much) is one of the better action games for the system.

When you boil it down Cabal is basically a shooting gallery with limited movement. You have a small space to move around in with the cursor trailing slightly behind. When firing you are locked in position but can freely target anything on the map. For defense every level has a few brick walls or other such objects you can hide behind for cover but much like Space Invaders it will gradually be destroyed. Once that happens you’ll have to master using the dodge roll; you’re invincible while rolling but it is easy to get hit by a stray bullet once it ends. Your only power-ups are a shotgun and a machine gun that last about 10 seconds; go wild! Grenades are in ready supply but due to the controls you’ll end up wasting a bunch of them.

With just two primary buttons it was a challenge adapting the arcade game’s setup to the NES controller and I don’t think they have done the best job of it. The arcade unit used a three button setup, one for shooting, one for grenades, and one for dodging. Here both grenades and the fire button are shared with the B button used for moving faster and dodging in combination with the D-pad. It’s less than ideal and will see you wasting grenades really fast.   It is at least manageable unlike Rare’s port of NARC.

Since this is essentially a shooting gallery length is a bit of a concern however overall this is a pretty meaty game. There are five main stages with four sub-levels each. The objective is to cause as much destruction and death possible to fill the meter to move on to the next stage. Depending on your skill these can last close to 10 minutes each or go by in as little as thirty seconds. Once you know the points where enemies will spawn on each map it’s easy to clear the screen to focus on destroying tanks and the environment which fills up the bar the quickest.

That type of ruthless efficiency is necessary as the game can be a bit of a challenge. It isn’t as cheap as most arcade games of the time but between the control setup and limited continues it will take some doing to get to the end. Overall I wouldn’t say that this is a particularly tough game but it does feel cheap at times as your cover is shredded within moments and there’s nothing you can do about it. I would say the roughest part is getting the mechanics down; the dodge roll isn’t the best survival mechanic even though I like it. The later levels tend to go overboard with the tanks, molotov chucking generals who can actually dodge just like you, and dive bombing jets. The boss battles I found to be easy in comparison; there’s usually a safe spot or two where you can sit and whittle them down.

As a port Rare has done a pretty good job of recreating the arcade game’s look. Many of the background details have had to be redesigned but it’s all there and fully destructible. The NES reduced color palette does mean that the color is more garish and colorful than the dull grey and brown of its quarter munching counterpart. I will say that I’m surprised that there is no flicker or slowdown even though the screen can get busy in short order. Despite the staunch military setting the game comes across as a bit goofy; your commando is a little too happy at the end of every level having murdered the population of a small town and that end level celebration dance never gets old.

There isn’t a whole lot of substance to it but in the end I really liked Cabal. Maybe the simplicity of the genre wasn’t to everyone’s liking which is why more games in this style were never made which is a pity. This is a quality conversion of a good game.