View cart “8 Eyes NES” has been added to your cart.

8 Eyes NES Game Cartridge
8 Eyes was released for the NES in 1990. Thinking Rabbit developed the game and Taxan published it. The game will have eight different levels and is one player or two players. 8 Eyes also has a large and diverse soundtrack that Kenzou Kumei composed. The operatic repertoire was quoted from often and every level had three pieces. The game is set in a future that is post apocalyptic. Mankind is trying to recover from a nuclear war and chaos that lasted hundreds of years. The Great King is trying to rebuild civilization with the eight jewels, known as 8 eyes. They were formed from 8 nuclear explosions, coming close to completely destroying Earth. The jewels have a mysterious power that could end the world if the wrong person gets a hold of them. The King’s dukes steal all the jewels to keep themselves, then banishing the King into nuclear wastelands. The Earth has once again been threatened to be plunged into war.
The player will control the Falconer Orin along with Cutrus, a fighting falcon. The mission is penetrating all eight of the Dukes’ castles collecting all 8 eyes.With Cutrus helping, the player will need to fight nuclear mutants, soldiers, and each of the castles’ dukes to obtain the jewels. After recovering the jewels, the player will need to take them back to Altar of Peace and the King will be able to complete rebuilding Earth. When completing levels, the player will receive a brand new sword. The castles can be played in the order, except the last, the player desires, but with hints hidden in game about the right order. The final castle, House of Ruth, is played once the first seven are completed. When at the Altar with all 8 eyes, the jewels will need to be placed in a specific order or it will be a game over. Hints about this order will be hidden within the game.
The game features a two player cooperative mode with one player controlling Orin and the second player controlling Cutrus. One player mode will actually be more difficult due to the player being limited on controlling both of the characters at the same time. Gameplay will also be similar to Castlevania, along with the graphical design.
UPC: 0-40886-30859-3
Platform: NES
Players: 1-2
Condition: Used
Genre: Platformer
Region: NTSC (North America)
Rating: Everyone 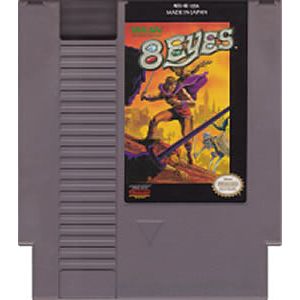