Cobra Command NES Game Cartridge
Cobra Command was released for the NES in 1988. Data East published and developed the game. Gameplay will be similar to the game Choplifter with the player’s goal for every level to save all hostages. The player will take control of a heavily armored helicopter and go through six stages destroying enemy gunboats, submarines, cannons, and tanks. The first mission is to Sumatra, the second mission is to Java, the third mission is to Borneo, the fourth mission is South China Sea, the fifth level is to Siam, and the sixth level is the enemy HQ. While playing through the levels, the player can obtain upgrades for engines, armor, missiles, guns, and the rescue equipment, which are ropes and ladders that are needed to save the hostages.
UPC: 0-13252-00210-4
Platform: NES
Players: 1-2
Condition: Used
Genre: Shooter
Region: NTSC (North America)
Rating: Everyone 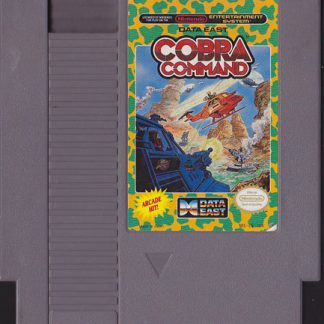