View cart “Wii Fit Wii” has been added to your cart.

Double Dare NES Game Cartridge
Double Dare was released for the NES in 1990. It was developed by Rare and published by GameTek. The game is based on Nickelodeon’s game show with the same name. It can have one player or have two players. When playing alone, the player will compete with the computer. The player will enter their team’s name and then select a character from four females and four males before starting the game. No matter what character the player chooses, their teammate will always be the other gender from what the player chose. The game will also have the choice of being set on one of the three difficulty levels. The higher levels will offer less time for answering questions and the computer opponent will be more difficult.
The game will play just like the television show, having two rounds with 10 trivia questions and round three will feature the obstacle course. The rules and scoring will apply from the television game show. A toss up challenge will determine which team will get the initial control of a round with trivia. To finish the toss up, every player will determine the angle and speed of whatever is being thrown and hit a target. The physical challenges will have the same type of play. Every player will use the D-Pad to press down or up and choose the answer for a trivia question. Questions will be varied and will have enough of them to avoid repetition even after many games played. The player that has the greatest amount of money at round two’s end will progress to the third round’s obstacle course.
For the player to get through one obstacle, they will need to alternate pressing between right and left or down and up on the D-Pad repeatedly. To grab a flag, a player will need to position themselves on the screen in the perfect spot and press A on the controller to retrieve the flag by jumping. The obstacles will be based on the television show’s real obstacles and will be randomized before starting the game. The only exception on the obstacles is the triangular jungle gym. The virtual prizes that are included for completing an obstacle course will include an NES, a television set, BMX bicycle, and many other gifts. It ends with the exotic vacation that is received for finishing the final obstacle.
UPC: 0-43948-59000-4
Platform: NES
Players: 1-2
Condition: Used
Genre: Other
Region: NTSC (North America)
Rating: Everyone 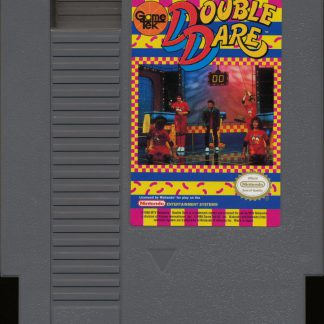