Family Feud NES Game Cartridge
Family Feud was released for the NES in 1991. It was developed by Beam Software and published by GameTek. It is based from the television game show with the exact name. A question from a survey will be read and the player will need to guess an answer that the survey has. A correct answer will give points that is based on the amount of people who gave a same answer. If an answer is wrong, that team will be given a strike. Once a team gets three strikes, the opponent will get a chance for a steal. If the opposite team fails to get a steal or if the answering team sweeps a board, they will win those points. The first team to reach at least 300 points will win the game. The winner will play in the final Round called Fast Money.
In the final round, Fast Money, the player will be asked 5 different questions, having to give each question an answer within 20 seconds. When the 20 seconds is up, the answers will be listed and then points will be rewarded. The exact questions will be asked again to another teammate and they will get 25 seconds for giving answers. They will not be able to duplicate any answers used during the first run. If the player achieves 200 or more points, they will win the entire game. If not, $5 will be awarded for every point scored under the 200.
UPC: 0-43948-56000-7
Platform: NES
Players: 1-2
Condition: Used
Genre: Other
Region: NTSC (North America)
Rating: Everyone 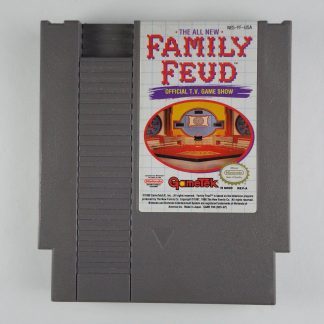