George Foreman’s KO Boxing NES Game Cartridge
George Foreman’s KO Boxing was released for the NES in 1992. It was developed by Acclaim and published by Beam Software. The player will take control of 43 year old George Foreman, who is on a quest trying to unite all the title belts from 3 fictional circuits of boxing. The gameplay will be similar to the game Punch-Out!! The player will be given options of blocking punches, evading left or right, and throwing punches, having a variety. Victory will be won with a knockout, TKO, or decision. A KO will require the player to knock the opponent to the ground four different times during the three rounds. When knocked down the fourth time, the player or other boxer will not be able to answer a 10-count. A TKO will be awarded when a boxer gets knocked to the ground three times within one round. If none of this happens by round three’s end, a boxer will be declared winner through decision. Decision is determined with the punches landed and thrown, total damage, and knockdowns.
The view of the player is third person over the boxer’s shoulders. A regular punch will be a cross, and holding Up on the D-Pad will have jabs thrown. A super punch will become available after avoiding punches. These punches will inflict extra damage. The screen will show the player’s energy meter, which will be drained when taking damage. Some energy will be restored during an intermission. Two players can box head to head and the game will use the password system to save progress.
UPC: 0-21481-60105-0
Platform: NES
Players: 1-2
Condition: Used
Genre: Sports
Region: NTSC (North America)
Rating: Everyone 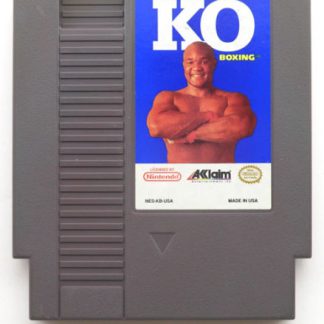