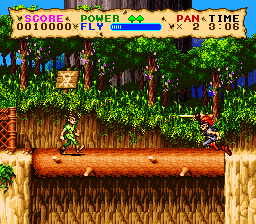 Buying a licensed video game nowadays is like playing Russian Roulette in that more often than not you’ll end up with a giant turd.  But once upon a time that wasn’t the case!  The likes of Capcom and Konami spun video game gold out of some of the most unlikely licenses, especially Disney.  You could buy a Disney game and it was almost guaranteed to be a quality product worthy of your time (except you know, the times you pick up something like Mickey Mousecapade.   good god that game!)

Then you had companies like Acclaim and the publisher of this gem, Sony Imagesoft, who it almost seemed made it their mission in life to ruin every little kid’s childhood one game at a time.  They both put out cheap licensed horseshit but every so often the stars aligned and a genuinely good game emerged from their dungeon, which is how we have this fantastic game.

Hook was released in 1992 for every major platform and by a variety of different publishers.  In this case the Super NES, Genesis, and Sega CD versions were published by Sony.  The SNES version was the lead platform and was later ported by Core Design to the Sega platforms.  I am not familiar with the developer Ukiyotei, but looking over their history I’ve played quite a few of their games and shouldn’t be surprised by the quality of this game.  And quality is exactly what it is.  While the movie wasn’t exactly a classic the developers were able to use the bare meat of the story and turned out one hell of a platformer.

At first glance Hook resembles your typical platformer.  As Peter you are armed with a sword that can be upgraded to fire waves of energy.  In many ways it resembles a more vibrant Castlevania with one exception: you can fly!  At least you can when you find Tinkerbell.  After filling your flight meter you can spend it however you choose.  The game takes full advantage of this and has many wide open areas for you to fly in and try to find secrets.  Tinkerbell is readily available throughout the levels so you can freely fly about knowing in a few seconds you can fill that bar again.  Some of the best platforming moments in the game require you to navigate tricky flight paths and survive long enough to reach Tinkerbell to refill your meter.  The later stages of the game eschew this mechanic, forcing you to figure out how to portion out your flight bar in order to progress. The first thing you’ll notice is the graphics.  The colors literally explode, and the game has some very excellent sprite work.  Hook features a level of vibrancy and detail not many games from that generation matched.  The game follows the plot of the movie loosely, enabling the designers to create a wider range of vistas than the movie would have allowed.  The locations visited run the platforming gamut but even despite that you’ll be hard pressed to find another game this lush.  Most importantly the levels remain visually distinct from most of the other platformers of the time, and how you traverse them is what separates the game from the rest.  The Genesis and Sega CD versions of Hook are the same as the SNES but lose some of the graphical luster due to the system’s color limitations.  The Sega CD game has a better soundtrack and a rather pointless additional CG intro but otherwise its obvious this led development on the SNES, leaving that as the best version. The only real flaw in the game is that it’s a bit too easy.  Mos of the enemies you’ll encounter aren’t very threatening and almost seem more content to ignore you and do their own thing.  The majority of the deaths in the game will come from falling in pits or landing on spikes because your flight power ran out.  Extra lives are literally thrown at you left and right and each stage’s boss fight is never overly complex.  Most bosses have easily recognizable patterns and are pushovers.  You’ll one shot most of the bosses, bottom line.

I definitely recommend the game despite the lack of challenge.  It’s sufficiently lengthy and the allure of using flight to see if you can fly to that corner of the level you saw earlier is slightly addicting.  Plus you can buy it for a few bucks nowadays so it really won’t hurt your pockets.