View cart “Jackal NES” has been added to your cart.

Jackal NES Game Cartridge
Jackal was released for the NES in 1988. It was developed and published by Konami. It was originally an arcade game that was released in 1986. The player in the game will need to maneuver a jeep that is armed to rescue prisoners that are trapped inside enemy territory. A group of four elite soldiers that underwent harsh training to be able to survive any environment was called a Jackal unit. The team consists of Corporal Grey, Sergeant Quint, Lieutenant Bob, and Colonel Decker. They were given the mission of driving two jeeps that are armed into a hostile territory so they could rescue the POWs.
Jackal is playable with two players at the same time. The second player will be able to join the game anytime during gameplay. Both jeeps that are being used will be labeled with a number on the hood to show which player has control of it, with player 1’s jeep being green and player 2’s jeep being brown. One button is used to fire the machine gun, and the second is for launching grenades. The player’s grenade launcher will be able to upgrade to the missile launcher, which then can upgrade two more times to give it longer reach, also allowing shrapnel rounds to be fired that will spread in multiple directions. The jeep’s machine gun will be weaker but has a better firing rate, but the launcher will be able to destroy most of the enemy artillery and vehicles in a single shot, including buildings and gates.
The game begins with two transport helicopters that drop the player’s jeeps into the enemy territory’s coast. A plane will follow that will drop the gunner and driver. The goal is penetrating the main headquarters to destroy the ultimate weapon. During gameplay, many internment camps will be passed that are holding POWs. The jeep will be able to carry any number of POWs that a stage has and take then to the closest heliport for a chopper to pick them up. If a certain amount of prisoners get taken to a chopper, the player’s launcher will upgrade one level. The game will be split into six different stages. Every stage will feature different bosses when completing them. These enemies will include statues that spit missiles, a battleship, and the game’s final boss being a tank with a large flamethrower, being destroyed effectively with the player’s machine gun.
The player can run over soldiers on foot with their jeep, but they will be destroyed if shot with projectiles or collide with another vehicle. When the jeep is destroyed, another jeep will appear and the player’s launcher will be downgraded all the way to it’s initial starting level. If there were any POWs that were being carried, they will spread around after the jeep wrecks and wait for the player to pick them up again. An extra life will be obtained when a certain amount of points are accumulated. The game will end after accomplishing all the missions or when the player loses all their extra lives. Jackal lacks a or continue feature, but a player can overcome this by joining in with the other player before the game over screen appears.
The NES version has three extra power ups that were added and were hidden. The green star will add an extra life to the player, the red star will kill all the enemies on screen, and the flashing star will upgrade the launcher to its highest level. These can be found when launching missiles or grenades into specific hiding spots.
UPC: 0-83717-11010-1
Platform: NES
Players: 1-2
Condition: Used
Genre: Run and Gun
Region: NTSC (North America)
Rating: Everyone 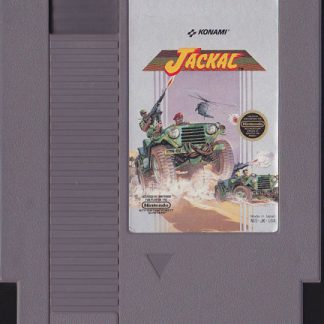