View cart “River City Ransom NES” has been added to your cart.

Narc NES Game Cartridge
Narc was released for the NES in 1990 and was originally an arcade game released in 1988. It was a targeted frequently by parental criticism due to it being an ultra-violent game, one of the earliest of its kind. It also was the first game in the arcades to use the processor TMS34010, which is 32-bits. Rare developed the the NES version and Acclaim Entertainment published it. It was supposed to be a video game with a powerful anti drug message but Nintendo, being strict on their censorship policies, removed all of the drug references, but retained most of the gore and violence. The NES version also has only two buttons to use when the arcade had four. The ability of firing missiles and jumping was still preserved.
The two main characters of the game are Hit Man and Max Force. Spencer Williams, the chairman of Narcotics Opposition in D.C., sent both of them a memo, which dispatched them on a Project called NARC. The mission is to find and arrest Mr Big, who is the head of a terrorist organization and trafficking drugs underground. The player will take control of either Hit Man or Max Force, shooting drug dealers, junkies, and kingpins organizing crime. Hit and Max are both have missile launchers and a machine gun. If the missile launcher is used to kill an enemy, they will explode into scorched pieces. The player can arrest some of the enemies if they surrender, then the enemies will float away having the word busted over their head. When the level is complete, there will be a tally of arrested enemies along with money and drugs confiscated from enemies that dropped them. Arrested enemies are worth more points than killed enemies.
UPC: 0-41240-13465-0
Platform: NES
Players: 1-2
Condition: Used
Genre: Run and Gun
Region: NTSC (North America)
Rating: Everyone 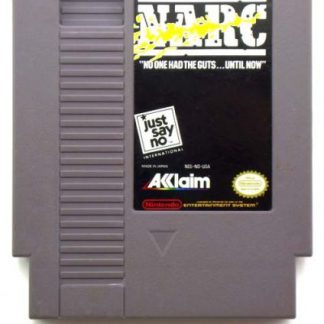