P.O.W. NES Game Cartridge
P.O.W.: Prisoners of War was released for the NES in 1989 and was originally for the arcades in 1988. The player will take control of a prisoner that is from the military who breaks out of the cell. He then will need to fight enemies and get into the main base to kill the enemy leader and then escape. The NES version is single player only, unlike the arcade which has 2 player Co-op. The main objective is escaping the enemy base and fight through four different stages that have many types of enemies that try to stop the player from escaping. The first stage is a camp for POW’s, the second is a warehouse, the third is a jungle, and the fourth is the enemy’s main base. The enemies will sometimes use vehicles like motorcycles, armored trucks, or helicopters. In the last stage, the player will confront the general of the enemies before the extraction helicopter is contacted to pick them up to proceed to the last escaping sequence.
The controls for the NES will consist of two buttons and the D-Pad, with the player able to jump, punch, and kick. The NES version also only has two special attacks when the arcade game had three, having the headbutt removed from the NES game. The player can do a jump kick by pressing kick and punch simultaneously, which are A and B. A back punch can be performed when the player holds the D-pad the opposite direction of their character and pressing the B button. A couple of different weapons can be picked up when an enemy is defeated, which are throwing knives and machine guns. Controls will change when a weapon is wielded. A knife will be thrown when the punch button is pressed, but the knife can held onto by kicking until needed. When the machine gun is wielded, it is fired using the button for kicking, and the ammunition can be conserved if the player presses punch, which has the player do a gun whip to the enemy.
There are some other NES differences in the game. The player will now have the ability of picking up and using grenades when fighting the boss in the first stage, which is a helicopter and the boss in the fourth stage, which is a tank. Grenades were used only by the enemies in the original arcade game. The NES game also has new enemies which consist of a fat strongman, shotgun wielders, and frogmen. A different final boss is also in the NES version. Rooms and huts are used for obtaining power ups after defeating enemies inside of them. The types of power ups that the player can get in the rooms and huts are full life recoveries, brass knuckles that will increase punching strength for the player, and armor that will make the player invincible to knife throws and gunshots.
UPC: 0-18484-18500-7
Platform: NES
Players: 1
Condition: Used
Genre: Beat’em Up
Region: NTSC (North America)
Rating: Everyone 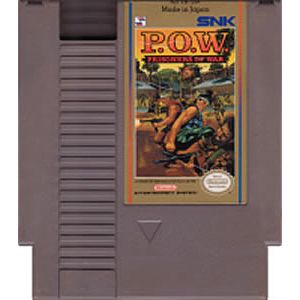