View cart “Robin Hood NES” has been added to your cart.

Robin Hood NES Game Cartridge
Robin Hood: Prince of Thieves was released for the NES in 1991. Sculpture Software developed the game and Virgin Games published it. The game was based on the movie. It was also featured on Nintendo Power’s July 1991 cover. The issue became notorious because the actual game did not release for another 6 months after that issue released. The game was featured on one episode of the show Captain N: The Game Master. That episode almost certainly referenced the game since it was NES’s only game that was about Robin Hood in that time frame. No characters during the episode referenced the game’s subtitle, probably due to the rights issue. The characters in that episode also do not resemble their film counterparts. Overall, the episode is vaguely alluded to the game.
The game will open with Robin Hood in Jerusalem inside a prison along with Azeem and Peter Dubois. Robin will need to free them and try to escape. Peter becomes wounded during the escape, but Azeem and Robin are able to make it to England. When they arrive at England, Robin learns his father was murdered and the Nottingham Sheriff took over England oppressively while King Richard is absent. Robin is told by Maid Marian there have been rumors of men hiding inside the Sherwood Forest and tells Robin to go search for them and to join them. When Robin Hood joins the Sherwood camp, it will become his home base the rest of gameplay. Robin Hood will leave continuously to take on a variety of missions. When a mission is completed, he will need to return to the camp to figure out what his next mission will be. Robin Hood eventually takes the last mission on getting rid of Nottingham’s Sheriff. Once the Sheriff is defeated, the game will be over and will conclude with Maid Marian and Robin Hood’s wedding. King Richard returns to England and interrupts the wedding. Richard ends up giving Marian away, with Robin and her getting married.
Robin Hood is notable for having several gameplay modes. The regular adventure mode depicts action from the overhead view as a player guides Robin through the game and battles enemies. The second mode that is used for head to head duels will depict action from a side view and will feature different controls allowing the player’s character to attack, guard, and jump. The game’s third mode is the melee mode that features action from a really high overhead view, which will allow a large scale battle to be depicted between big forces. This game mode will ensue when a lot Robin Hood’s merry men clash with enemy soldiers. During sequences with horse racing, there is another mode, which is a mixture of side and overhead views. The horse will need to be guided on jumping over the debris to eventually beat the competition.
There was also an equipping system that was loose, with nearly all objects being able to be held and be used as weapons.When Duncan joins Robin Hood’s band for the first time, he is equipped with a chicken’s leg to attack enemies.
UPC: 0-52145-80004-5
Platform: NES
Players: 1
Condition: Used
Genre: Action and Adventure
Region: NTSC (North America)
Rating: Everyone 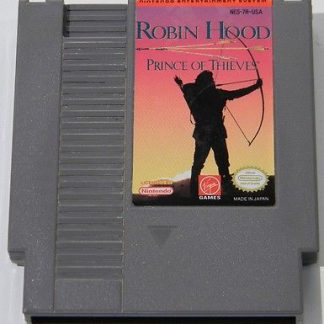