Snoopy’s Silly Sports Spectacular NES Game Cartridge
Snoopy’s Silly Sports Spectacular was released for the NES in 1990. It was developed and published by Kemco. The game has six different events and included characters from the cartoon Peanuts series. It could be either single player or two players. The first event is the Sack Race where Spike and &nbsp;Snoopy race each other in potato sacks. The second is Boot Throwing which is like a hammer toss but uses an old boot instead. The third is Pogo where the player hops over obstacles with a pogo stick. The fourth is Overboard where Spike and Snoopy try to knock one another off of a boat and into water. The fifth is Pile of Pizza, where the player balances pizzas while walking to a finish line. The sixth is River Jump where the player pole vaults over a river trying to get over.
The background while playing in events will use Italy landmarks like the Leaning Tower of Pisa and structures use Roman architecture like the Colosseum. The River Jump event will require precise timing like the long jump event in Track and Field. A lot of the video game looks like it was ported from Commodore 64 game Alternative World Games. While playing, graphics will sometimes flicker and color palettes will also be weird for specific events.
UPC: 0-44499-00007-3
Platform: NES
Players: 1-2
Condition: Used
Genre: Sports
Region: NTSC (North America)
Rating: Everyone 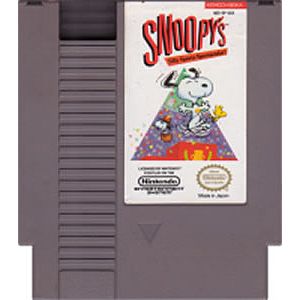